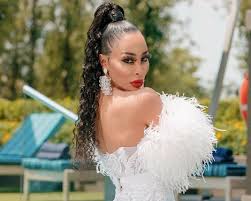 Khanyi Mbau’s journey to stardom began after actress Lindiwe Chibi was shot by her boyfriend, leaving room for her to be replaced on Muvhango.

Since that time, Khanyi has gone ahead to enjoy a career that can only be well described as controversial. During her time in the limelight, she has proven to be very hardworking and dedicated to her craft as she also earned herself the nickname of ‘queen of bling’ due to her love for the finest things of life. But regardless of all that she has achieved in her career, including winning a South African International Film Academy Award for Best Actress for her performance in Red Room (2019), Khanyi will forever be noted for her headline-grabbing relationship her former millionaire husband Mandla Mthembu.

Her full name is Khanyisile Mbau, she is 35 years old (born 15 October 1985). She was born and raised in Soweto.Her parents are Menzi Mcunu (father) and Lynette Sisi Mbau (mother),  She has a daughter named Khanukani. She is an actress, model, music artist, and a socialite.

She won the 2019 South African International Film Academy Awards for Best Actress for her work in Red Room.

She was born to unmarried parents; mother Lynette Sisi Mbau who worked at Barclays Bank, and father Menzi Mcunu. Despite not having a claim to his child since he was not married to her mother, Mcunu was still able to give his daughter her name Khanyisile, which means one who brings light.

Due to the demands of life, Khanyi’s mother left her young daughter in the care of her parents in Mofolo, Soweto, and returned to work. Her grandparents, particularly her grandmother Gladys, went on to raise the young girl, instilling in her a sense of discipline and decorum. Not much else is known about Khanyi Mbau’s early years other than that she attended what was supposed to be a white-only crèche called Flock on Eloff Street before enrolling at Bedfordview High School. The next bit of information that is available to the public about her comes from 2005 when she was cast to play the character of Doobsie on the SABC2 soap opera, Muvhango.

While Khanyi Mbau made her acting debut on Muvhango, her time on the show was shortlived as she was fired due to the negative publicity that always seemed to be around her. The particular incident that left producers with no option but to let her go was when she reportedly traveled outside the country to the Middle East without giving notice as Muvhango was still filming. 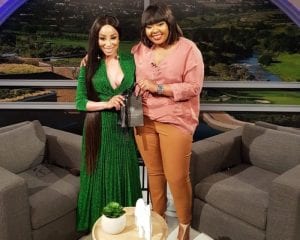 After her stint on the SABC2 soap opera came to an end, Khanyi joined the SABC1 hit drama series Mzansi in 2006, playing the role of Mbali. Following the cancellation of the series, she moved to join the cast of After 9, another SABC1 drama series in 2007. In 2011, the actress appeared alongside Bonang Matheba, JR, Tatum Keshwar, Dionne Song, Snotkop, and Loyiso Gola in the third season of the famed reality show, Tropika Island, which took place in Phuket, Thailand. Her next gig after that was as a guest judge on SABC1’s Turn It Out in 2012, the same year she released her biography titled Bitch, Please! I’m Khanyi Mbau.

In the following year, Khanyi Mbau starred in an episode of E.tv’s anthology drama series, Ekasi: Our Stories, and then featured in two DStv productions; first in the Vuzu documentary, I Am, before portraying the character of Sindisiwe Sibeko in the Mzansi Magic mini-series, Like Father Like Son.

2013 proved to be somewhat of a breakthrough year for her as she appeared alongside Babalwa Mneno and Nonhle Thema in the e.tv reality show, Reality Check, before launching her own talk show, Katch It With Khanyi, which was very popular and received a nomination for a South African Film and Television Award in 2015. 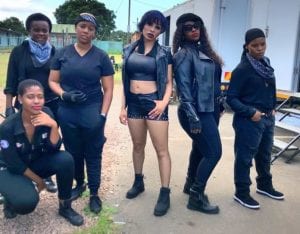 In 2010, while going about her business as an actress and TV host, Khanyi Mbau launched a music career that many have argued did not quite manage to get off the ground. She released a self-titled debut album that year that featured songs like “I Miss You”, “La ‘Weyi”, Do Me”, and “Skheshekheshe”.

For a few years, nothing more was heard about Khanyi in relation to her music until she announced that she had signed to Mabala Noise Entertainment in 2016. The Johannesburg native opted to make a comeback after, according to her, taking time off to gain respect and understanding for the craft. Following this, she released a song titled “Shake”. It subsequently took her a couple more years before she was able to release another song, one titled “Ubusuku Bonke” in 2020.

Khanyi’s most famous relationship was with Mandla Mthembu, who was about thirty years older than her when they first got together.

The former Robben Island prisoner turned millionaire was fifty when he married the then twenty-year-old beauty when she was four months pregnant with his child. On the 24th of December, 2006, they welcomed a daughter. 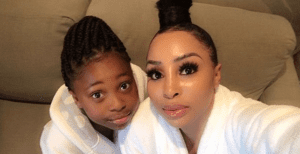 In 2009, the pair divorced and Khanyi Mbau began dating 51-year-old married millionaire, Theunis Cronus. Their relationship was, however, short-lived and over by January 2010. The next man she went on to publicly acknowledge to be her boyfriend was musician Tebogo Lerole. This surprised many as Tebogo did not fit the mold of the type of men she had gotten accustomed to dating. Their relationship is said to have begun in 2011 and it lasted for about seven years before Mbau took to social media to announce that they were going their separate ways in January 2018.