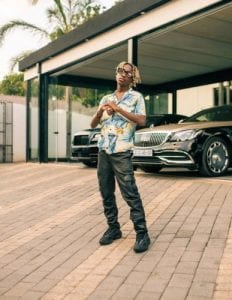 New Kid on the block and Riky Rick’s protege Uncle Vinny owned this weekend as the rising star recently celebrated his 19th birthday Party in Braam and his legion of fans flooded the streets.

Multiple Videos from the celebrations have been shared on social media showing all and sundry in full attendance and we haven’t seen anything this lit since Cassper’s come up.

The birthday celebrations were so lit that the police had to come and shut down the party.

Ever since a video of him dancing to Amapiano especially Major League Djz Amapiano Balcony mix trended all over social media, everyone has been asking who uncle Vinny? what does he do and how old is he? You can read Uncle Vinny’s Biography Here  does and where he’s headed. Chatting to Scoop and Ms Cosmo on their YouTube show, The PoPcast, the rising star opened up about who he is. Uncle Vinny describes himself as a presenter, events curator and plans to get into radio very soon.