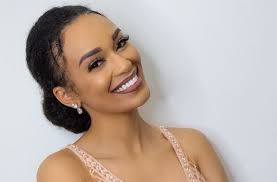 Undoubtedly one of the most beautiful South African women you would ever see, Thusi has proven she is not just beauty as her talent has earned her a role in a few popular international TV shows and films.

Her full name is Sithembile Xola Pearl Thusi, she was born on May 13, 1988, in Durban, KwaZulu-Natal Province, South Africa. While the identity of her mother is unknown, her father has been identified as Bhekizizwe Thusi.

As mentioned above, the identity of Pearl Thusi’s mother is not known. It is, however, public knowledge that she died in 2004 when her daughter was only just a teenager. Her father, Bhekizizwe Thusi, on the other hand, played a significant role in her becoming who she is today although things were not always smooth between them.

Speaking in an interview about her parents, Thusi said that her relationship with her father was complicated when she was growing up due to the fact that he allegedly abused her mother. The pair have since mended fences and are very much involved in each other’s lives. This made Bhekizizwe’s death very hard for her to deal with as she deactivated her social media accounts without warning in 2020. The reasons behind her actions were not clear at first, however, on her birthday that year, she revealed that she had lost her father when she wrote that this was her first birthday without him. The circumstances surrounding his death are unknown to the public.

The only family of hers that is left are her two sisters; Prunella and Pamela, and her two daughters; one biological and the other adopted.

She has been reported to have dated quite a few people, however, only her relationships with two famous South African sports presenters; Walter Mokoena and Robert Marawa, are the most significant.

The actress and media personality first began dating Mokoena who fathered her first daughter, Thandolwethu Mokoena. It is not exactly clear when the pair began dating or when they ultimately called it quits but as Thusi put it, they were together on and off for a while. The veteran sports presenter has since moved on to marry his longtime girlfriend, Nosizwe Vuso, who he dated for three years and had a child with before becoming husband and wife.

Following the end of that relationship, Pearl Thusi began dating another heavyweight in the sports broadcasting industry, Supersports very own Robert Marawa. According to reports, the two started seeing each other sometime in 2016 and Marawa even went as far as getting on one knee and asking her to spend the rest of her life with him. Things, however, did not play out as he had hoped as they separated sometime before August 2017. Confirming their split, Marawa sent out a tweet that cleared the air and pointed out that they still remain friends.

I confirm the rumour & speculation that our relationship with Miss Pearl Thusi ended a few months ago.We continue 2 be good friends though.

How She Launched Her Career in Entertainment and Business:

According to her educational records, Thusi received her high school education at Pinetown Girls’ High School. After graduating, she proceeded to enroll at the University of Witwatersrand in Johannesburg where she studied Drama. She is said to also have a Bachelor of Arts degree in Communications from the University of South Africa, Pretoria.

Prior to getting into university, Pearl Thusi had begun pursuing a career as a model. She competed in the 2003 Miss Teen South Africa pageant and finished first runner-up. A few years later, while still working as a model, she would go ahead to make her television presenting and acting debut in SABC 3’s iCrew in 2006, and in an episode of the comedy-drama series, The No. 1 Ladies’ Detective Agency in 2009.

From that time onward, things began to look up for the Durban native as she went on to add radio personality, TV host, and businesswoman to her list of titles. Thusi is the co-owner of Ayana Africa – a modeling agency she started with comedian David Kau and news anchor Nzinga Qunta.

As a television presenter, one of the most popular shows Pearl Thusi has hosted was Lip Sync Battle Africa alongside Nigerian musician D’Banj. The show, which is an adaptation of the American musical reality competition television series of the same name presented by LL Cool J and Chrissy Teigen on Paramount Network, ran from 2016 to 2017. Other TV shows she has hosted include SABC 1’s Live Amp from 2011 to 2016, Real Goboza in 2012, Tropika Island of Treasure in 2013, and Moments in 2015. In recent times, she serves as the host of MTV Base’s Behind the Story, a role she assumed in 2018 at the beginning of the show’s third season.

As an actress, Pearl Thusi has appeared in a variety of local and international projects. Her acting debut came in 2009 when she played the role of Patricia Kopong in an episode of the BBC and HBO produced comedy-drama series, The No. 1 Ladies’ Detective Agency. In the early 2010s, she featured in local projects like Zone 14 and Isidingo before becoming the talk of the town after she scored the main role of Dayana Mampasi in the critically acclaimed American drama series, Quantico, which also starred Indian actress Priyanka Chopra.
Pearl Thusi again grabbed headlines across Africa when she was cast as Tala in the direct-to-video American fantasy film, The Scorpion King: Book of Souls (2018). Her remarkable performance in the film went a long way in convincing the creators and producers of the Netflix crime drama series, Queen Sono, to cast her in a leading role. The actress plays the titular character who is a secret South African clandestine agent that battles personal issues as well as various criminal operations. The show airs on Netflix and is the platform’s first African original series.