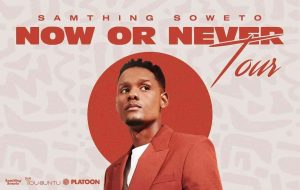 Samthing Soweto set the ball rolling when he released “Amagent” some days back. Getting back on his feet and giving assurance to his worried fans that he’s back to business, he has announced a Now or Never nationwide tour.

The upcoming tour will be the first major move from Samthing Soweto since his disappearance from the scene some years ago and this nationwide event is sure to feature big names and other thrilling offers. Fans can expect to experience more of Samthing Soweto’s melodic sound.

The date for the Now or Never Tour hasn’t yet been confirmed but Tickets will go live Friday 12midday.