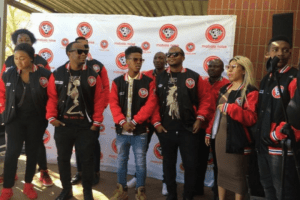 Just about a month after adding Ricky Rick to their line-up, Mabala Noise Entertainment has signed more multiple artists.

According to Ricky Rick, Mabala Noise Entertainment remains one of the few labels that are still rooting for local artists, and that was the main reason he decided to sign with it. The label has nurtured a lot of hot artists, big shots, and upcoming artists. DJ Bongz, Ms Jones, Lvovo, DJ Chynaman and new rapper Du Boiz all benefited from the label.

The recording company is co-owned by DJ Bongz and Reginald Nkabinde who is a businessman as well as a politician.

The young artists whose real name is Nsikayesizwe David Junior Ngcobo signed to the Music label and he will go on to remain with it until 2018 when he announced that he is off the record label.

Mabala however, has maintained that the star is still its signed artist even though he is said to be signed to Universal Music Group. Before signing on to Mabala, there were rumours that he was eyed by Roc Nation.

Zakwe may not be the most popular on the list, but the Kwa-Mashu born and bred singer is another artist that is signed to the Mabala Noise Entertainment.

The case of PRO is not different from that of Zola as there have been statements that the rapper is not signed to the Label. This has brought a lot of questions on the reason why the two stars were unveiled.

Rapper Gigi Lamayne was another artist that was signed to the record label that has gradually become rather controversial. She remained with the label until December 2017 when she decided to go ahead and do it all on her own.

Even though Zola was unveiled by Mabala Noise Entertainment as one of its own in June 2016, the label would go on to claim that it has not signed the rapper.

The Major league twins also had a deal with the music label, but just as with others, it hasn’t been all smooth as in 2017, less than a year into the deal, the twins were already ready to pack up their bags and hit the road because the label has allegedly failed to keep to its side of the deal because it has failed to pay them any advances or any money.

A model, television personality and actor, is another person that got signed to the records. While he still remains with them, he is also silent, just as the records.

Since his purported unveiling as one of the new signings, DJ Finzo has remained rather in the background with neither him nor the record saying anything about the deal.

SA’s multitalented woman Letoya Makhene is another signing that Mabala made. Like every other person mentioned before her, the actress and singer is not without a little of the drama that has come to be a part of the records. But this time around, she was the one receiving it when fans on twitter said it is because of her witchcraft that Mabala will continue to struggle.

Khanyi Mbau’s appearance on the list got people asking whether the stable of Mabala Noise is signing everyone. Some of the new artists’ music talent remains questionable to a lot of music critics.

Khanyi Mbau has previously tried to launch a music career in 2010 which failed. She still gave it another trial earlier this year with the release of a freestyle called Press Play.

But, people out there seem to think she ain’t cut out for the music industry.

This rapper got signed to the record label after he was given a contract following the label seeing him while representing the Swati people during a performance. That is all about him, as nothing more is heard.