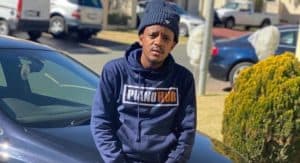 The prolific South African amapiano hitmaker Kabza De Small made history on the Channel 0 Lockdown House Party TV show with his album launch and being the first ever artist to play 2 hours on the show.

This shows that Kabza has a lot in store musically, despite the juicy vibes served.

There are claims that the music producer is the best thing to happen to Amapiano genre.

“Launching his album but playing exclusives from the next album, that’s how much music he has,” Shimza tweeted.

We Congratulate Kabza De Small On His History In The Making!.