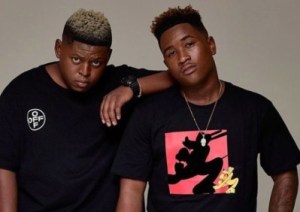 The Gqom duo have split to focus on their Solo Careers.

Some days ago, Zipho “Goldmax” Mthembu dropped his solo single, Iphupho Lami which left many of us wondering why, He later told City Press’ sister paper, Sunday Sun in an interview, that the full albumhttps://www.instagram.com/p/CBpgOaBlY50/?utm_source=ig_embed would be released next month.

He was quoted saying:

“There’s no bad blood between us, it’s just that we’re now focusing on our solo careers,” Goldmax said.

Thobani “Que” Mgobhozi said he was also in the studio working on his solo album.

“There are no bad vibes about our split,” the Omunye crooner said.

Some sources said the duo parted ways because they wanted to try careers in showbiz.

But one source painted a different picture, saying there was conflict between them: “They feel they’re talented and will be more appreciated as individuals who will be more successful apart. They realised that they’re different; they want different things in life and have different styles of music.”

They were told that, if they wanted to make it big in the industry, they needed to leave the group and start their own thing.