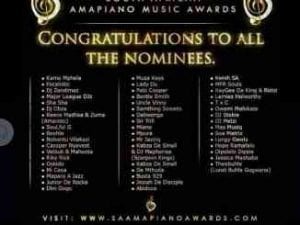 For too long Amapiano producers have been sidelined and unappreciated despite their huge contributions to the south African music space. Resolving this Years-long injustice, a new music awards show has been established, the name of the show is SAAPA which means South African Amapiano Music Awards.

Amapiano is a music genre that has transitioned into one of South Africa’s and indeed Africa’s biggest indigenous musical Sound. The genre has captured the attention of many both local and international.

Appreciating and recognizing the producers and artists who made this feat possible, a new awards show has been created.

Launched right in the midst of a pandemic where producers and artists alike were finding it difficult to cope due to the lockdown and restrictions, the awards show is by the people, for the people and winners are voted for by the people themselves. Voters can win up to R100,000 worth of prizes for voting for their favorite nominees. Artists will win R10,000 cash for each winning category while Song of the Year will win a cash prize of R50000.

MOST VIRAL AMAPIANO SONG OF THE YEAR

AMAPIANO ALBUM OF THE YEAR

AMAPIANO ARTIST OF THE YEAR

AMAPIANO SONG OF THE YEAR

Nominated on the first episode includes DJ Stokie, Kabza De Small, Busta 929 and others. See list of nominees below: