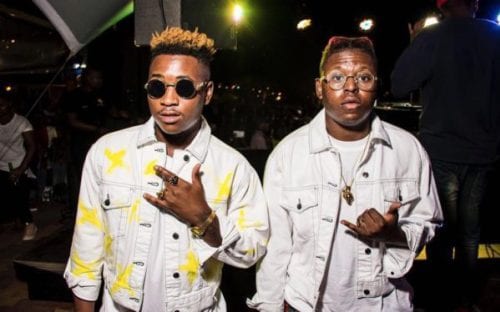 Distruction Boyz have reacted to the shocking development that alleges that hit track Omunye was stolen from DJ Lag. A City Press report claimed the group’s summer smash hit Omunye was the same as DJ LAG’s Trip to New York released three months before Omunye.

Distruction Boyz however claim they purchased the song from DJ Mphyd. “The guy who sold us the beat told us that he produced it and he did not even know DJ LAG. LAG posted a 30 second teaser of the song on Instagram but this guy doesn’t even have Instagram. How can we copy the song from an Instagram video, Goldmax told TshisaLIVE.

“We are so sad. This is our song. This is our biggest song. We created the song from scratch. People have been dancing to this song for months. How come it is being questioned now?,” he adds.

Goldmax reveal the group haven’t received any legal action. “We have not been made aware of any legal action and I am confident that if they do, they will not win this case. We won’t stop performing the song. It is our song. People don’t understand gqom. We are not going to fight DJ LAG. We know him, why would we copy his style? Maybe he has a new album coming and he is touring overseas, so maybe this is a strategy to market him here,” he concluded.

The group’s business partner DJ Tira also spoke out on the report, saying such accusations were moving the industry backwards.

“This is the last thing we need. We are doing our best to promote this sound so it feeds black families. This is taking us back. Killing a black child’s dream. You will never win. The truth will prevail,” he wrote in a tweet.