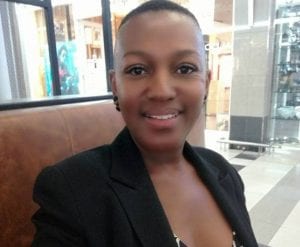 Michelle Molatlou died after losing a battle with cervical cancer.

According to a family spokesman and Molatlou’s brother Kgosi Monye, the 44-year-old who was the last Miss Black South Africa before the pageant was discontinued in 1993, died at the National Hospital in Bloemfontein on Tuesday 19th December 2017.

“Michelle was surrounded by lots of love with family and friends.

“She succumbed to her battle with cervical cancer at the National Hospital in Bloemfontein,” Monye said in a statement. He described her life as one that was well spent as she touched a lot of lives during her time on earth. 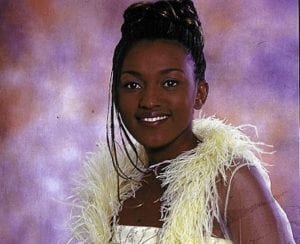 “Michelle was a consummate professional, a loving mother to her two sons, a loving child to her parents, siblings, and a good friend to many.

“She had drawn her inspiration from different people and situations to be the person she was. She was a hard worker and very passionate about charity work and absolutely loved working with the youth,” Monye said.

Michelle Molatlou was a beauty to reckon with. She garnered inspiration from different people and situations to be the person she was. During her tenure as Miss Black South Africa, Michelle challenged stereotypes faced by beauty queens. She went on to become a TV presenter on SABC2’s magazine show Mamepe, and later started acting on a number of productions including Kgalelo Pelo, In the Name of Love, Mokgonyana Matswale and most recently Generations: The Legacy.

One of her close friends and fellow presenter of the Mamepe magazine show, Shane Phure Maja,” praised her as a woman who was a strong fighter and one who despised self-pity.

“I met her in the late ’90s. We worked together for the production company for Mamepe and she came into the team after Connie Masilo [now Ferguson] had left the production to go and rejoin Generations.

“We struck up a brotherly and sisterly relationship. She was a fun-loving and God-fearing woman who exuded excellence and embraced the broadcasting space with so much influence on young people.

“Everywhere we went, be it overseas or on the continent, whether covering weddings or mastering ceremonies, she commanded a huge level of respect and she was a source of inspiration to so many young people and mostly young girls,” Maja said.

Michelle Molatlou made her last big acting appearance on Generations 2016. The soapie’s spokeswoman Gaaratwe Mokhethi commented: “She was a very warm person and very chilled. It’s a major loss to the industry. It’s a very sad day. May the family be comforted.”

Her other recent TV shows were on Mzansi Magic’s Lokshin Bioscope movies. She also ventured into the corporate world and worked for Simeka/Graphicor and Mortimer Harvey before she started her own successful catering company.

Tributes have been pouring in for the late TV star and beauty queen Michelle Molatlou.

May your beautiful soul rest in peace
we will miss you. your memories will live on
rest in peace nanas. you have run your race beautifully 😢😢😢🙏❤️❤️❤️
michelle molatlou pic.twitter.com/Kg6KIKyHIB

You have all your duties fulfilled, in your heart there was no guilt.
So you shall forever stay at ease and in the heavens above, rest in peace. Tshego Michelle Molatlou pic.twitter.com/YrlWuOR3ju

Her Life On Earth

She was Born on September 20, 1973, in Johannesburg, South Africa. It was also in the country that she was brought up alongside her siblings including Kgosi Monye.

In the early 1990s, she decided on becoming a model, and then she delved into pageantry. In 1993, she contested and won Miss Black South Africa which happened to be the last of the contest that would hold.

She transitioned to other aspects of entertainment including acting, as well as TV presentation. She appeared in productions including Die Wüstenrose (2000), Eine Liebe in Afrika (2003), and Folge deinem Herzen (2006) among others. However, it was for her role in Generations: The Legacy that she got more popular as an actress even though it was only a minor one that she got a year before her death.

The former beauty queen was once married to Limpopo-born, entrepreneur Malope Mojapelo. The two got married in 2006 and they remained together for the next 8 years before they decided to end the union in divorce. Michelle made the announcement that she was ending the marriage because she was not happy. Her husband, on the other hand, refused to comment on the issue as he insisted his then-wife should be asked.

Their marriage was blessed with two kids. Apart from being man and wife, they were also business partners as they started an internet café in Soweto.

Before she got married to Malope, the late Mamepe presenter dated a man known as Ephraim Sima. Unfortunately, things did not go well between them. According to court documents dated 2005, the beautiful presenter was hit by Sima after he got irritated due to rumors that claimed she was having an affair with Metro FM head Leasley Nhloko.

Her Death and funeral

The former beauty queen and veteran TV personality was diagnosed with cervical cancer but as it got more serious and it became hard for her to care for herself and her kids, she moved to back to Bloemfontein where she was taken care of by her father.

She first spent a month at the Pelonomi Hospital in Bloemfontein after which she was transferred to National Hospital. She was discharged from the first hospital as a result of the improvement in her health, hence she was expected to be coming as an outpatient. The belief was that she was going to make full recovery and was scheduled to start radiation therapy.

Unfortunately, there was a complication following which she was moved to the National Hospital. Two days later, she lost her life to the ailment.

A funeral service was held for her at the Boikhuco Old Age Home Hall, Botshabelo before she was laid to rest at the the Phahameng Cemetery.