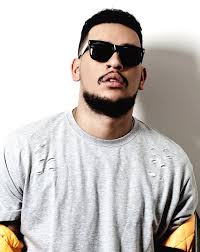 His real name is Kiernan Jarryd Forbes, AKA, as he is more popularly known as is currently one of the most influential South African musicians in the entertainment industry, a feat he has been able to achieve at a young age.

He got his start as far back as 2002 as part of Entity, a hip-hop rap group known for their hit song – Touch N Go which made waves in 2005. As a solo artist, he has gained critical and commercial success since the release of Altar Ego – his debut album. His single, Victory Lap and its subsequent remix led to his breakthrough.

Now an award-winning (both local and international) artist, he has been commended for his contribution to the South African hip-hop scene. His unique flow and his penchant for controversy have made him a fixture in the gossip headlines. Here’s everything to know about the hip-hop superstar.

AKA was born in Cape Town (in South Africa’s Western Cape Province) on the 28th of January, 1988, making him 32 years old ( but before he became a record producer, rapper and sound engineer, he battled poverty as he came from humble beginnings. He spent much of his early years with his grandmother in Cape Flats in Mitchell’s Plain and has a brother who is five years younger than him.

In 1995, when AKA was about Seven, he moved out of Mitchell’s Plain to live with his mother in Johannesburg. His father worked for an insurance company while his mother was a school teacher.

While in Cape Town, he attended Holy Cross Convent but when he moved to Johannesburg, he began attending Greenside Primary School. The rapper also later attended St John’s College.

While he was still in high school, in 2002, he went on to start a rap group – Entity with some of his friends. They released their first album in 2005 which was nominated for the KORA Awards for the ‘Best African Hip Hop’ category the same year. They also performed at the ceremony which was great publicity for them and went on to win other accolades. Unfortunately, the group disbanded in 2006.

Next up for him was the formation of a production group called I.V. League with Kamza and Buks. The team went on to produce for many South African Musicians including Psyfo, PRO, Loyiso Bala, Jub Jub, Khuli Chana, Tear Gas, Tuks Senganga, Jae, Bala Brothers and Shugasmakx. AKA willingly admits that the formation of I.V. League opened up a lot of doors for him and through this, his career started to take form. It was also during this period that he decided that he’d rather perform than produce.

As a solo artist, AKA has released hits such as In My Walk, Do it and Mistakes. His singles have also placed him on the South African 5 FM Top 40. He has also collaborated with several artists from Nigeria, Ghana and all over Africa including Tweezy, Wizkid, Burna Boy, Sarkodie, Dreamteam, Ice Prince, Tumi, JR, K.O, Da L.E.S, Nasty C, Kuli Chana, Yanga, Emtee, Diamond Platnumz, etc.

Some of his popular songs include:

His Awards And Achievements

At the Metro FM Music Awards, AKA won “Best Hip Hop” for a solo act, “Best Produced Album” for Altar Ego and “Best Newcomer.” During the GQ Awards in South Africa, he won the “Best Dressed Man” award. He was also dubbed the Prince of South African Rap around this period at the 7th annual Channel O Music Video Awards. He won Channel O’s Most Gifted Hip-Hop Video for Victory Lap. He also won the Best Street Urban Music Album and Male Artist of the Year at the 18th annual South African Music Awards.

While this is not an award per se, it is still worth mentioning  – AKA has opened for many international stars during their South African tours including Kendrick Lamar, Rick Ross, Kanye West, Snoop Dogg, 2 Chainz, and Big Sean. He also later signed an enviable multi-album deal with Sony Music in 2014. This, along with the success of subsequent singles and albums, is proof of just how AKA’s career has continued to grow.

AKA is dating Nelli Tembe, a non-celebrity who he has refered to as ‘very private’. Prior to his current relationship, he was with DJ Zinhle. Before this was confirmed, there were speculations that the two were in a relationship despite a lack of confirmation for a long time. However, when Nicky Green hosted The Close Up with DJ Zinhle as a guest, during that episode, DJ ZInhle is quoted saying “The thing is, you are a girl you are in love and you want to show off – but, you can’t”. Many took this as a confirmation of her relationship with AKA.

The two travelled together for a holiday in January 2015 to Mauritius and in February of 2015, there were speculations about DJ Zinhle being pregnant with AKA’s child. In July of the same year, she gave birth to their daughter and first child, Kairo Owethu Forbes. Despite this, the couple eventually broke up.

AKA also dated South African mega celeb – Bonang Matheba or as her fans affectionately call her, Queen B. The duo were referred to as South Africa’s power couple with their relationship taking a positive turn when AKA introduced her to his family in December of 2016. However, the couple called it quits on the relationship in January 2017.